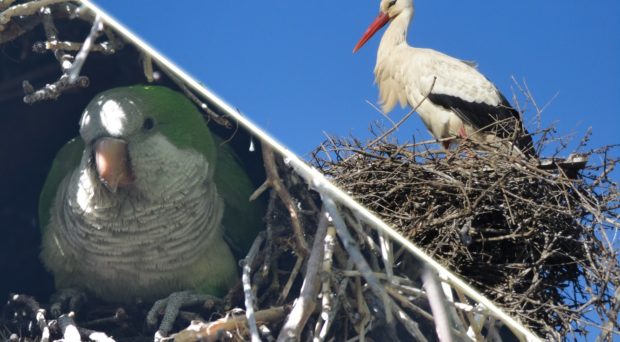 From South America, the monk parakeet (Myiopsitta monachus) has become one of the most successful invasive birds with populations established in cities on all continents. Due to the international wildlife trade, monk parakeet was a common pet during the last decades that, consequently, has given rise to invasive populations. The monk parakeet is the only parrot species that builds its own nest, composed of wood sticks and located on trees and human facilities. In light of this, we assessed the probability that both species were associated to reduce the predation pressure from the raptor community, because white storks lack predators and would indirectly protect the monk parakeets in their nests. During two breeding seasons, we located all nests of parakeets, storks and raptors in an extensive area that covered urban and rural habitats. We also recorded interactions between monk parakeets and raptors in the proximity of parakeet nests to assess their responses facing predators.

As we hypothesised, monk parakeets developed a commensalism relationship with white storks against the predation pressure from raptors. This relationship was more likely in rural areas where the raptor pressure was higher than in urban areas. Monk parakeets additionally preferred nest locations with low presence of raptors and high presence of other conspecifics.

According to this specific spatial distribution of their nests, monk parakeets showed a strong dependence for the anti-predator defence provided by white storks because parakeets abandoned their nests after the abandonment of the nest by the white stork. Likewise, monk parakeet mostly did not flush when a raptor came close to its nest if it was associated with a white stork, unlike parakeets without associated storks.

In conclusion, unexpected interactions may arise between invasive species and recipient native communities, then we hope that our work assists to the development of effective management plans facing the global problem of biological invasions, such as enhancing the predator community as an effective biological controller.

How Lifesaving Organs For Transplant Go Missing In Transit: Scores of organs — mostly kidneys — are trashed each year and many more become critically delayed while being shipped on commercial airliners, a new investigation finds

Google Health’s AI system is better than human doctors at predicting breast cancer, reports a new mammogram study published in Nature. Pitted against six radiologists working individually, the AI performed 11.5% better, even when the humans were given patient and family histories.